Summary of key findings from landmark IEA report: “Net zero by 2050 – a roadmap for the global energy sector.”

Last week, the International Energy Agency (IEA) published a milestone report – Net Zero by 2050: A Roadmap for the Global Energy System. The report seeks to provide a comprehensive study of how to transition to a net zero energy system by 2050 while ensuring stable and affordable energy supplies, providing universal energy access, and enabling robust economic growth.

Key highlights of the IEA’s modelling and analysis under the Net Zero Emissions (NZE) scenario outlined in the report are summarised below.

Renewable energy is rapidly deployed at scale: Solar and wind energy reach annual additions of 630 gigawatts (GW) of solar PV and 390 GW of wind by 2030, four-times the record levels set in 2020. For solar PV, this is equivalent to installing the world’s current largest solar park roughly every day.

Fossil fuel demand falls by three-quarters: Fossil fuel use falls from almost 80% of total energy supply today to slightly over 20% by 2050.

No new fossil fuel production is needed: Beyond projects already committed as of 2021, there are no new oil and gas fields approved for development in the IEA’s pathway, and no new coal mines or mine extensions are required. Days after the IEA’s report was released, the G7 and European Union vowed to end international investment in coal. Other governments that continue to provide financing to fossil fuel projects are already facing increased scrutiny in light of the IEA’s report.

Electric vehicle sales surge over the next decade: EVs go from around 5% of global car sales to more than 60% by 2030.

Rapid technology development and deployment is needed to decarbonising heavy industry: In heavy industry and long-distance transport, the share of emissions reductions from technologies that are still under development today is even higher than other sectors. After rapid innovation progress through R&D, demonstration and initial deployment between now and 2030 to bring new clean technologies to market, the world then has to put them into action. Every month from 2030 onwards, ten heavy industrial plants are equipped with CCUS, three new hydrogen-based industrial plants are built, and 2 GW of electrolyser capacity are added at industrial sites.

Methane emissions plummet as targeted measures are implemented: Methane emissions from fossil fuel supply fall by 75% over the next ten years as a result of a global, concerted effort to deploy all available abatement measures and technologies.

Critical minerals represent a huge economic opportunity: The total market size of critical minerals like copper, cobalt, manganese and various rare earth metals grows almost seven-fold between 2020 and 2030 in the net zero pathway. Revenues from those minerals are larger than revenues from coal well before 2030.

Current government funding commitments are highly insufficient: Around USD 90 billion of public money needs to be mobilised globally as soon as possible to complete a portfolio of demonstration projects before 2030. Currently, only roughly USD 25 billion is budgeted for that period.

The clean energy transition creates millions of jobs: The transition to net zero brings substantial new opportunities for employment, with 14 million jobs created by 2030 in the NZE scenario thanks to new activities and investment in clean energy.

Flexibility is a valuable and necessary capability in the electricity grid: Electricity system flexibility – needed to balance wind and solar with evolving demand patterns – quadruples by 2050, even as retirements of fossil fuel capacity reduce conventional sources of flexibility. The transition calls for major increases in all sources of flexibility: batteries, demand response and low-carbon flexible power plants, supported by smarter and more digital electricity networks. 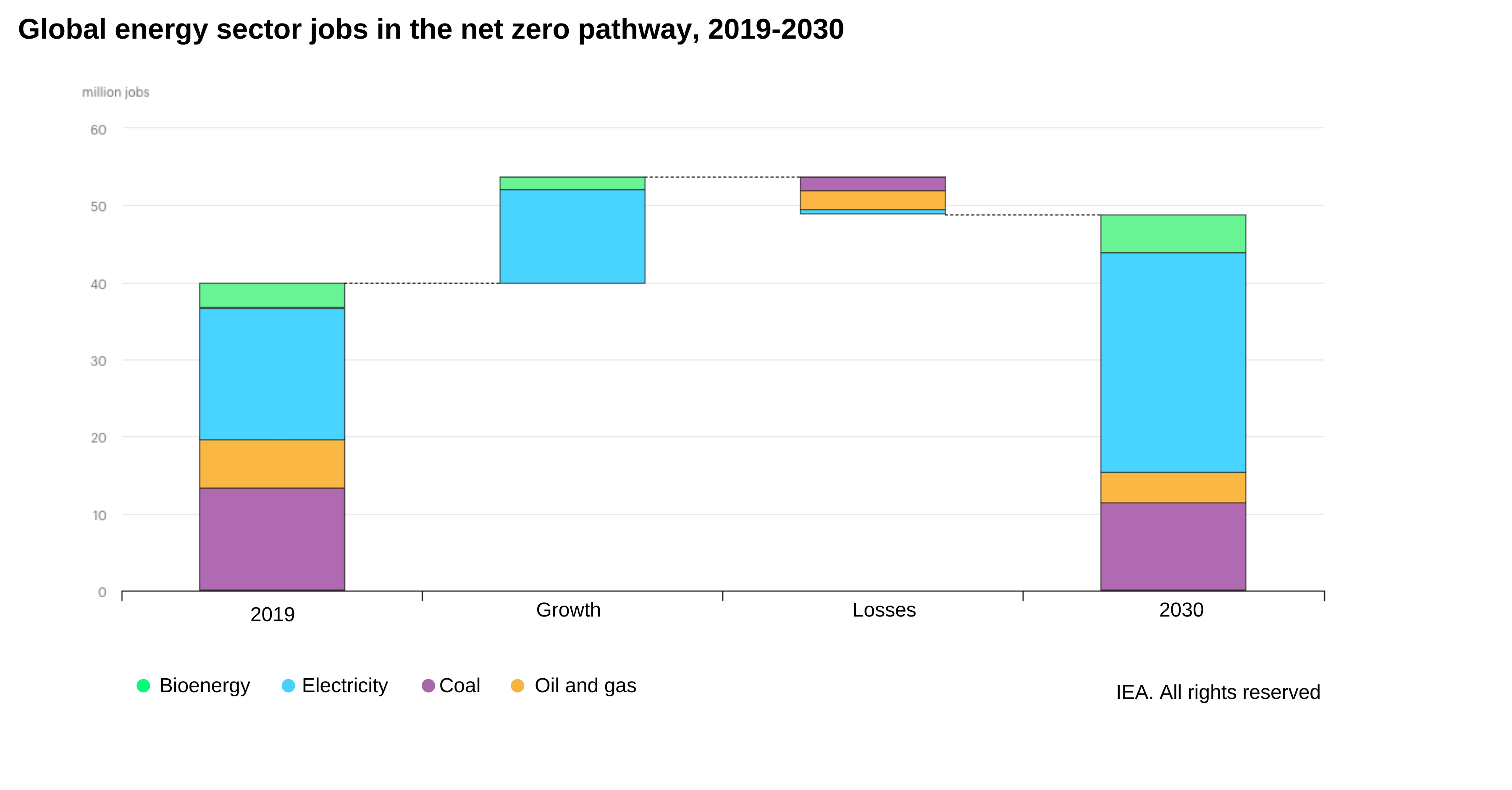 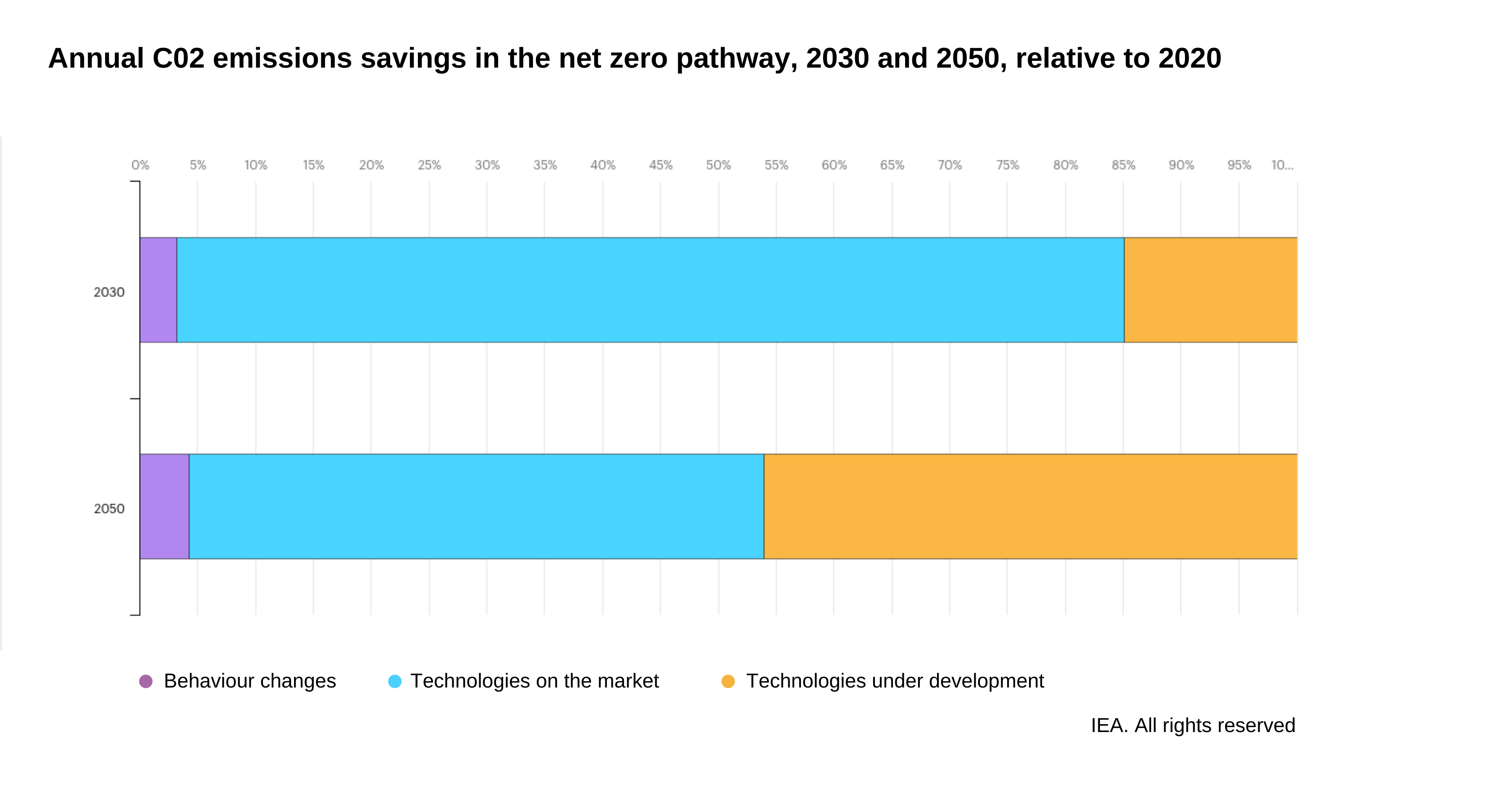 The IEA acknowledges that the net zero pathway it has laid out relies on unprecedented international co-operation among governments, especially on innovation and investment. However, the report also provides much-needed detail on the key technology and policy milestones required across a range of sectors in order for the global energy system to reach net zero emissions by 2050.

The granularity of the IEA’s modelling and analysis will allow climate action by corporates and governments to be assessed against more concrete benchmarks going forward. This reinforces the importance of commitments to reaching net zero emissions by 2050 being supported by detailed strategies and tangible actions to achieve this outcome.

The full IEA Report can be found at IEA Report: Net Zero by 2050

The road from Glasgow: what next after COP26

As the curtain comes down on COP26 Glasgow can claim to have moved the dial on the Race to Zero while also highlighting the work ahead that is needed to bring emissions down in line with the science. One of the most notable features of this COP has been that the private sector is at the very heart of the discussion.

This website uses cookies to improve your experience while you navigate through the website. Out of these cookies, the cookies that are categorized as necessary are stored on your browser as they are essential for the working of basic functionalities of the website. We also use third-party cookies that help us analyze and understand how you use this website. These cookies will be stored in your browser only with your consent. You also have the option to opt-out of these cookies. But opting out of some of these cookies may have an effect on your browsing experience.
Necessary Always Enabled
Necessary cookies are absolutely essential for the website to function properly. This category only includes cookies that ensures basic functionalities and security features of the website. These cookies do not store any personal information.
Non-necessary
Any cookies that may not be particularly necessary for the website to function and is used specifically to collect user personal data via analytics, ads, other embedded contents are termed as non-necessary cookies. It is mandatory to procure user consent prior to running these cookies on your website.
SAVE & ACCEPT